The all-time classic. The book which inspired countless romance novel authors to spread their wings. The story which encouraged legions of fans to dream of becoming Mrs. Darcy.

I’ve watched every movie version and TV version of this novel which exists in the English language, including the Bollywood version. It’s incredible how well this storyline translates for different eras and different attitudes. Elizabeth is feisty, intelligent – and human. She definitely has her faults.

The challenges Elizabeth faces are ones which many of us can relate to. Her mother just doesn’t understand her. Her father supports her but just isn’t always there for the family. She has dreams but is trapped by circumstances. She makes mistakes. She misunderstands people. She does her best to be loyal to the ones she loves.

It’s important to remember, too, that this was written to be a satire. This isn’t a serious, attentive review of what life was really like in the early 1800s. Jane Austen was deliberately exaggerating characteristics to poke fun of types of people. That being said, she grounded her story in reality. A young woman would indeed be scandalously ruined if she shacked up with a man without marrying him. Women did have few other choices in life than to get married – and if they missed their opportunity, then they often became a “burden” on their family.

Well worth reading, if only because so many other books, songs, and movies make references to characters and scenes from Pride and Prejudice. It’s one of those classics that people assume you’re familiar with. If you end up adoring the characters and storyline, then all the better!

Rating note: The book is wholly “sweet / clean” and suitable for all ages. There is mention of a younger sister running off with a man without marrying him, but nothing else is mentioned about their situation. The heroine and hero barely kiss.

Book Cover Images are copyright to the original author and are used in this review as a fair use usage. 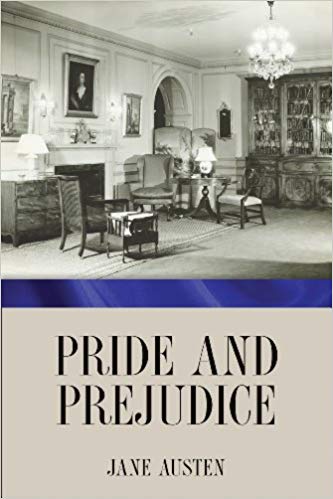