Persuasion was the book Jane Austen was working on when she died at age 41 in 1817. Many people feel it is an autobiographical story – Jane herself fell in love in her late teens, but was unable to wed the man she loved. She was proposed to at least once later in life but never did marry.

Anne Elliot is the middle of three daughters. Her father, Sir Walter, lost his wife many years ago, and has pretty much adopted eldest sister Elizabeth as his companion for spending money and throwing balls. Together, the two of them have blown through the family money and are now broke. Youngest sister Mary has married off to a neighboring family, so it is up to Anne to find a solution. She rents out their large house to bring in money, and the family plans to move to Bath.

Unfortunately, the people who rent the house are related to the man Anne loved dearly as a teenager – Captain Wentworth. She did want to marry the Captain, but her father and godmother convinced her that he was not worthy of the family connection. She has regretted it ever since, and never married despite at least one offer. Soon Wentworth is back in her life, but he dismisses her, still hurt over her refusal.

The book was very involving; I was sucked in almost immediately and read it through in one night. You could sense dearly that poor Anne was being mistreated by many people in her life, despite her best attempts to keep everybody happy. She is withering away in her home, doomed to a life alone because of that one “mistake” years ago. Captain Wentworth himself dismisses her when he returns and sees her for the first time, thinking that she is but a pale shadow of the former girl he knew.

And yet, over time he slowly comes to realize that she does have an inner strength, one that he respects and loves. He realizes that the “firmness of character” others claim to have is more like pig-headedness at times which is no better.

I very much appreciate all of the “reflections” that go on in the book. There are numerous times that one character feels one way, and then another character feels the same way (or the opposite way) to counterpoint the situation.

I felt Anne was a little too passive, though. The movies seem to “fix” this a bit, to make it more believable that Captain Wentworth would have even noticed her, to fall in love with her again. In the book for example, Captain Wentworth is drawn into her because of Louisa’s fall when all Anne really does is say “calm down everyone”. In the movie, she is much more active in helping out, drawing that praise.

Book cover images are copyright to the original author. They are used in this review as a fair use usage. 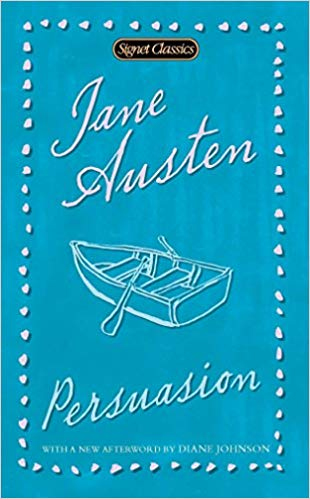