I love historical novels and Jane Austen holds a special place in my heart. Even so, I have issues with Emma. I adore much of the writing style, but the plot and characters irk me.

Let me start by saying that Jane gets kudos for trying to do something different here. In other stories she had not-well-off young women who were desperately trying to get by in life, to thrive in the world they had been born into. Emma is Jane’s efforts to focus on a new kind of heroine. Rather than being poor and worried about her future, Emma is quite secure. She is wealthy. She has a father who dotes on her, a house she loves, and she is perfectly content to live like this forever. She has no need of a husband or really of a partner at all. This is an interesting diversion from other stories.

Emma, aged 21, grew up without a mother and with a loose-handed governess. So she is spoiled and very aware of her class and status. It might be hard especially for American readers to relate to just how stratified English culture was at the time. Some situations – like how Emma treats farmers – might be seen as cruel. It’s important to put this into context. This was “normal” at the time. Heck, for a few societies on the earth this is “normal” even in modern times. You can’t really judge it as right or wrong.

Mr. Knightley, aged 38, has been pretty much an uncle to Emma her entire life. He was a teen when she was born and was always there to watch over her and correct her. He tries to guide Emma as she plays romantic match-making games with the people around her, but Emma thinks she knows what is best. She manages to bungle a variety of relationships. To her credit, she does feel badly right away, but then she plows ahead with a new scheme.

One of the key issues I have with this book is the VERY creepy idea that Mr. Knightley has been lusting after Emma since she turned 13. If I had a young daughter and a male family friend in his late 20s started following her around as soon as she hit puberty, I would be quite irate with him. Again, I realize gigantic age gaps in this time period were normal. As they say in the story, men weren’t expected to take on a family until they hit age 30 and had the financial strength to support a family. Women were supposed to marry in their late teens / early 20s so they could kick out as many kids as possible. Even so, though, to have a person that was almost an uncle to Emma stalking her as soon as she started showing a womanly body really bothers me a lot.

Also, I realize Emma is written to have her be spoiled. Jane Austen tries to give her some humanity by making her dote on her father and feel remorse each time she does something wrong. However, to me it just doesn’t get past the way-too-spoiled aspect of her personality. Interestingly, I enjoy some of the movie versions FAR more than I enjoy the book because in the movie they alter the storyline just enough to make it much more palatable. They smooth out some of Emma’s annoying traits and make the Emma-Knightly pairing a bit less creepy.

Still, if you’re looking to start reading the Jane Austen series of books, I wouldn’t start here. I’d start either with Pride & Prejudice or with Sense & Sensibility.

Book cover images are copyright to the original author. They are used in this review as a fair use usage. 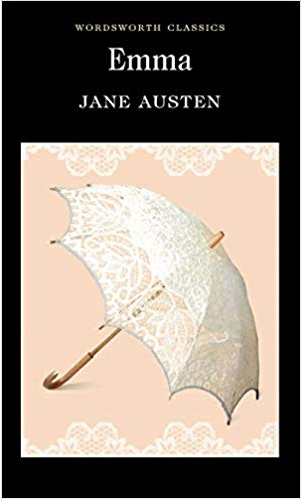